“They may kill me, but they cannot kill my ideas. They can crush my body, but they will not be able to crush my spirit.” – Shaheed Bhagat Singh 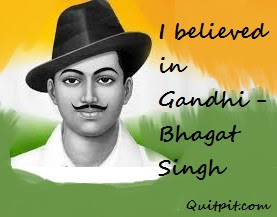 Saheed-e-Azam Bhagat Singh, who sacrificed his life for his country India, who happily kissed the noose and hung himself for the freedom of his beloved Bharat, merely, at the age of 23 years and 6 months is one of the most influential revolutionaries of the Indian Independence Movement. He died the death of a martyr. Following the day of 23 April 1931, the supporters and followers of Bhagat Singh regarded him as a “Shaheed” (martyr).

Bhagat Singh could have asked for mercy but this true son of Bharat Maa refused to accept the mercy from the British Govt. He wanted his death to ignite a strong fire at every nook and cranny of the country and wanted each and every citizen to participate in the struggle for freedom. His dream was to see India as a free country and can even die for his dream.

Bhagat Singh does not believe in violence from his childhood. His family believed in the Gandhian ideology of non-violence

And for a while, he was also the supporter of the Gandhian philosophy and even as a young took part in the Non-Cooperation Movement in the year 1920-1922 but there were the 2 incidents which shifted his heart away from Mahatma Gandhi.

The incidents of Jallliawala Bagh massacre occurred on 13th April 1919 which shook him to his core.

And the second incident was the one because of which the Non-Cooperation Movement was called off. the Chauri Chaura Incident on 5th February 1922.

“The Sanctity of law can be maintained only so long as it is the expression of the will of the people.”- Shaheed Bhagat Singh

On 30th October 1928, In protest against the arrival of the Simon Commission, Lala Lajpat Rai marched toward the Lahore Railway station.

The police resorted to a brutal Lathi charge to thwart the advancement of the protester. During this Lathi-charge, Lala Lajpat Rai was severely injured and died on November, 17th.

Bhagat Singh and Shivaram Rajguru, In order to take revenge against his death In December 1928, fatally shot John Saunders, mistaking Saunders for the British police superintendent, James Scott, whom they had intended to assassinate.

The police tried to capture him. However, Bhagat Singh was successful in avoiding arrest by shaving his beard and cutting his hair which is a violation of the sacred tenets of Sikhism.

Bhagat Singh made deaf to hear.

On April 8th, 1929, Bhagat Singh and Batukeshwar Dutt threw a bomb inside the assembly, and shouted “INQUILAB ZINDABAD” and threw pamphlet outlining their missive into the air.

The bomb was not meant to kill or injure anyone but to make the deaf British MPs to hear the voices of labors too and think of the poor before making any new bill. Following the blast, the Two allowed the arrest.

In Jail, awaiting trial, Bhagat Singh joined his fellow defendant Jatindra Nath Das in a hunger strike, demanding better prison condition for Indian prisoners, the strike lasts for 166 days but they didn’t get the success in it and the fast ends at Jatin Das’s death from starvation in September 1929.

While in prison, Bhagat Singh, Sukhdev, and Rajguru had written a letter to Lord Irwin, wherein they asked to be treated as prisoners of war and consequently to be executed by firing squad and not by hanging.

Even at the end of their life, they were not scared of the death and consulting the way they want to die. Such is the brave hearts.

Bhagat Singh’s friend, Prannath Mehta, visited him in the jail on 20th March, four days before his execution, with a draft letter for mercy, but he declined to sign it.

He does not kneel in front of the Britisher till the end of his last day and stood still for his dream.

It is believed by the Whatsapp Univerity that he was sentenced on 14th Feb but the truth is. The sentenced was pronounced on 7th October 1930. His death sentence has no link with 14th Feb.

On 7th October 1930, the day, the sentence was pronounced by the Special Tribunal, Bhagat Singh was not present in the court. Thereafter when the advocate came to the jail and said: ” Sardar Bhagat Singh, very sorry the court had awarded you the death sentence”.

To which Shaheed Bhagat Singh replied ” There is no need to feel sorry, and quoted Bhagat Kabir”

Want to know more about the life of Bhagat Singh.

List of Some of the Books on the life of Shaheed Bhagat Singh: